A Brief History of Hydroponics from 1000BC to present 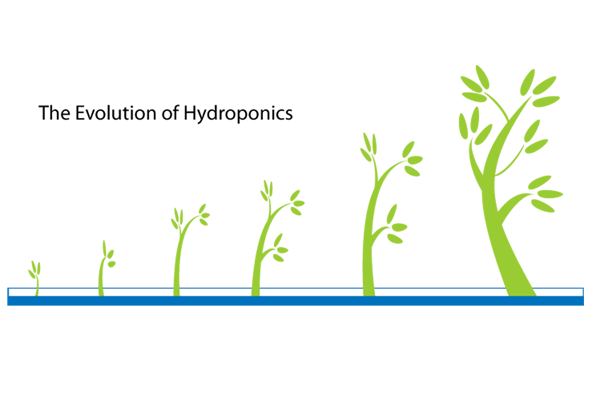 The word Hydroponics is derived from the Greek ύδωρ=water and πονέω=cultivate. Hydroponics is a type of horticulture and is considered (by some) a subset of hydroculture. Due to the way the history of hydroponics rolls out, we will treat water culture/ hydroculture as a variation or method of Hydroponics.

Hydroponics = “Water Cultivate” in Greek. the root of all hydroponic methods and types of systems.

Hydroculture = hybrid of ”Water” in Greek and Culture in English. A method of hydroponics where farmers grow plants in water with the aid of using a soilless medium.

Water Culture= The name may mean the same as Hydroculture but in practice it is different. Water culture means growing plants in water “without” medium. Most hydroponic growers know it as the very popular Deep Water Culture and you will learn that some systems actually do incorporate the use of a growing medium.

500 B.C., The first known instance of water-based hydroponics is on the Hanging Gardens of Babylon. Scholars and Archaeologists found remnants of a complicated system of tiered stone culverts. They theorized that there was a continuous flow of water that came from a centrally located reservoir. They describe it as an irrigation system of streams of water coming from an elevated source flowing down inclined stone channels, irrigating all the hanging plants.

1699, John Woodward published his water culture experiments with spearmint. He found that less pure water made the plants grow better.

1842, The discovery of the critical 9 elements needed for soilless cultivation

1859–1875, the Growth of plants without soil in mineral nutrient solutions was called solution culture

1929, William Frederick Gericke of UC Berkeley grew tomato vines twenty-five feet tall in his back yard in mineral nutrient solutions rather than soil!

1937, with help from W. A. Setchell, Gericke introduces the term hydroponics, water culture, and soon after published Complete Guide to Soilless Gardening.

1939, The U.S. and British Armies installed hydroponic systems at several military bases on islands in the Pacific to provide fresh produce to troops during wartime.

In the 1960s, Allen Cooper of England developed the nutrient film technique

In the 1970s, The rise of ubiquitous plastics significantly lowers the cost of construction and eliminates the destructive properties of earlier system components.

2017, Canada becomes one of the world leaders in hydroponics with hundreds of acres of large-scale commercial hydroponic greenhouses.

2020, Currently Hydroponics can produce 10 times the yield per acre of soil planted crops and uses 1/20th the amount of water. Approximately 90 percent of all lettuce and tomatoes in the US and Canada are being grown hydroponically. Advances in technology are allowing people to grow their own vegetables at home. (we’re guessing that’s why you’re here)

This ever-expanding, evolving, and changing list is due to the advances in hydroponic technology over the last several thousand years, or more, and it looks as though there is no end in sight. Hydroponics is considered by many, the most promising new development in farming technology that is the most flexible, scalable, and sustainable option in commercial and hobby agriculture today.

What is this Absurd Thing Called Hydroculture?

What is a Bioponics System? An Explosive New Area of Hydroponics.

The Alluring Pros and Cons of Hydroponics

Hi there! I'm Penny a Marketing Guru turned Hydroponic Researcher and Farmer. For some time, I have been successfully growing & enjoying nutritious greens by applying hydroponic vertical farming technique. Now I want to share all the knowledge and skills I acquired through my many hours of research, experiments and mistakes so that maybe you don't have to.
PrevPreviousWorlds Largest Hydroponic System
NextAeroponics vs Hydroponics- A Fight in 3 RoundsNext