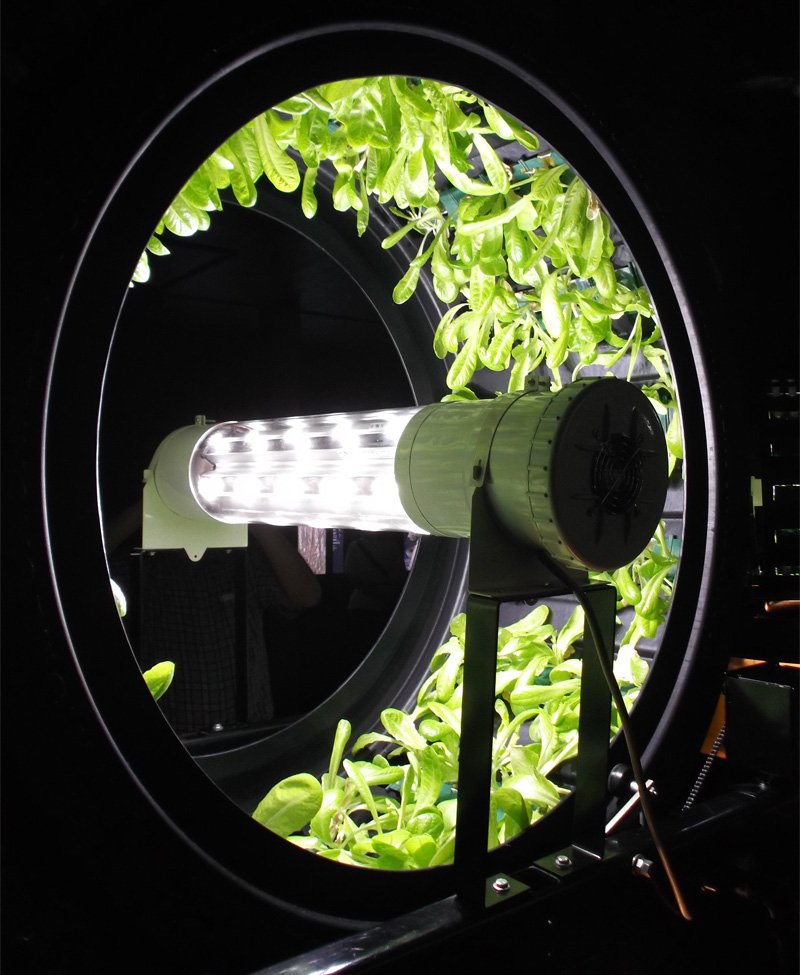 Will I grow taller if I hang upside down from my feet?

What is a rotary hydroponics system?

We know that you already prize efficiency and low-maintenance gardening solutions, these are the things that draw people to hydroponics in the first place.  You already use well-researched, crafty solutions to maximize efficiency.  Perhaps you use ebb and flow systems and analyze water data outputs on a daily basis.  Maybe you are an aquaponics enthusiast and carefully select fish for your own personalized ecosystem to maintain.

Rotary hydroponics systems have a very space-age appearance with their ringed structure and slow spin about a bright light.  They conjure mental images of life-sustaining spacecraft, Dyson spheres (they even bear a visual resemblance), and domed growth labs on Mars.  Does it surprise you at all that the system was designed by NASA for use within the International Space Station?

Don’t let the astronomy giant deter you, though, as the construction of a rotary hydroponics system is rather simple:  Rotary hydroponics systems are composed of a ring, a central light source, and a nutrient water container.  The ring is housed with plants that slowly rotate about the fixed light source.  The plants are provided with a dip in the nutrient bath on the downward part of their rotation.

Converting your hydroponics garden into a rotary hydroponics garden can give you access to a couple of distinct features:  more ground space and faster growing times.  There are also many kitchen-sized sets that look stylish, too!

How can rotary hydroponics save space?

One hidden thing wick, NFT, and ebb ‘n’ flow systems all have in common, along with traditional agriculture, is that they all require you to be thinking horizontally.  At best, with these systems, you might stack your hydroponics systems a few vertical layers high and add in some artificial light.  The end result is a pretty flat-growing environment with a ton of wasted aerial space.

As you can see by the pictures, rotary hydroponics takes this problem and curls it up into a… ring.  Now you’re thinking vertically and optimizing your space!

While it may look bulky due to the machinery, the results can be quite amazing when you look at the math.  A normal two-foot by eight-foot area of floor space would only produce 16 square feet of space for growing, yet the same area used by a rotary hydroponics system would give you over 25 square feet of growing space.  The Length of your growing area is effectively over 12X bigger!

It seems like a bit of fantasy; just take the weight of gravity off of something and it will grow faster, better, stronger.  The reality, it seems, can’t be so simple.  Yet there is a science to it – root structures don’t need to be as robust for plants that won’t spend their entire day head up.  One hobbyist described getting ripe tomatoes by day 35 of using a Volksgarden system.

It is important to remember that there is a distinction between growing faster and growing taller, though.  As the plants in these systems grow inwards, not the upwards you’ve come to associate with plant growth, there can be some problems with taller plants.  Remember that for every foot of growth from an individual plant you are going to need a wheel that is at least two feet high and two feet long, length-wise.  While common commercial-scale hydroponics crops, such as lettuce, aren’t going to have much trouble with these systems due to their small stature there are others that aren’t going to be as feasible.

Again, size is very important here.  You just aren’t going to be able to grow seven-foot beanstalks or experiment with citrus trees in a rotary hydroponics garden without a massive space investment.  As a result, these systems can be quite popular for herbs and maybe lettuce.

As mentioned above, the Volksgarden can be quite successful with tomato plants, but there are also commercial products available for the kitchen hydroponics garden.  Take a look at the successfully kickstarted ‘Rotofarm’ from Bace.  This tiny (just 15 inches tall) device is advertised as being great for small chilis, broccoli, and greens.  It isn’t impossible to imagine basil, thyme, or chives growing in it, either.

Lastly, it should be said that – apart from the spinning – rotary hydroponics systems aren’t creating anything objectively new for the plants you choose to use within it.  If you weren’t having any luck with hydroponics-resistant plants like blueberries in other systems, there isn’t any harm in trying them again in a rotary system but there shouldn’t be any false hope on the outcome either.

Are rotary hydroponics the dream of the future that will lend itself to making Elon Musk’s dream of people living on Mars a reality?  It is hard to say, but the fact is we don’t have to travel aboard a spacecraft to see the power of a rotary hydroponics system today.  The two keys to their power all come down to a bit of grade school math and periodic vacations from gravity.  What’s more is that rotary hydroponics systems are ready for your home or greenhouse today, not sometime in the far-flung future.

Due to the nature of vertical thinking, it seems now that these hydroponics systems will best be capitalized on with the usage of small plants grown in an increased area per footage of floor space.  Perhaps in the future, coalitions of engineers and agronomists will come together and make giant wheels that spin about huge LED lights, within them growing huge plants.  Maybe those giant wheels will be placed on Mars, in a shuttle, or your local food grower’s greenhouse… it is hard to tell now.  What we do know is that this is an interesting technology that utilizes creative new solutions to answer old problems.

The Ridiculously Useful Rotary Hydroponics System- 3 Designs to choose from

A Straightforward Guide to Run To Waste Hydroponic System

Everything you need to know about The Dutch Bucket Method

John Alexander is a writer, English language educator, and plant enthusiast. After graduating from the University of Tennessee in Knoxville, he began working in labs filled with plants - identifying their seeds, counting their pollen, extracting their DNA, and (of course!) watering them as needed. Nowadays, he is focused more on words and language, whether that be teaching or writing.
PrevPreviousA Straightforward Guide to Run To Waste Hydroponic System
NextThe Ridiculously Useful Rotary Hydroponics System- 3 Designs to choose fromNext